As much as I would like to barrel ahead and do super cool exciting analytics with the hockey data that I’ve been exploring in the last several posts, I’m simply not ready yet. The exploration process is not complete and I discovered (so far) one problem that requires me to enhance my data a bit. But that’s to be expected. Most data has flaws of one sort or another, so the trick is to find and fix those flaws where possible.

In today’s post, I have two objectives. First, I have covered a lot of ground in the last few posts, so I want to step back and restate the overall exploration process that I’m focused on right now. In addition, I want to more narrowly define my data analytics goals for my first project. Second, I want to start digging into the details of data that I thought appeared unusual when I created my first round of simple statistics.

You can rewind to the beginning of the series by starting here and then following the pointers at the end of each page to the next post in the series.

As I mentioned in my last post, I am currently in an exploratory phase with my data analytics project. Although I would love to dive in and do some cool predictive analytics or machine learning projects, I really need to continue learning as much about my data as possible before diving into more advanced techniques.

My data exploration process has the following four steps:

For my analytics project, I’ve decided to limit myself to the data that I can obtain freely by using the NHL statistics API (https://statsapi.web.nhl.com/api/v1). There are other data sets out there with additional data points, but I’m happy to work with official data right now and see how far I can get.

Here’s what I have cobbled together so far in Power BI: 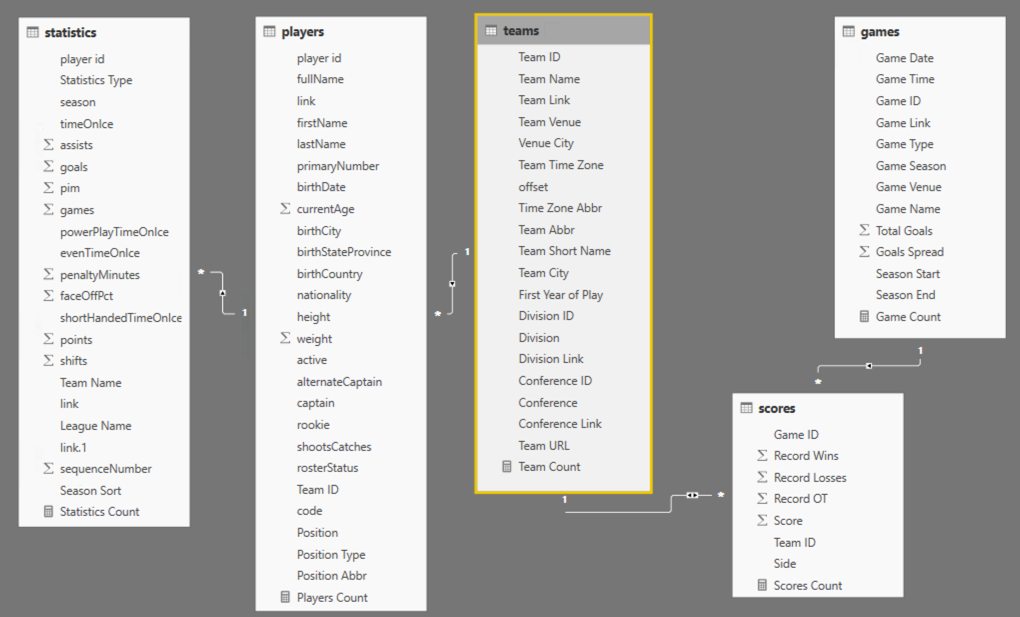 Each rectangle in the diagram above represents a query that forms a table in the Power BI model:

I know that I can still go back to the NHL statistics API and get team level statistics and play details from games, but I’ll save that analysis for another day. For now, I think that I have enough to work with in a variety of ways from visual analysis to predictive analysis, machine learning, and pattern-finding.

Step 2: Determining which data is relevant to my question

There’s a lot of data to use here. It can get overwhelming to try to explore it all at once. So I need to narrow down what I want to do with the data to determine which is relevant for each type of analysis that I want to perform.

As an example, the initial question that launched me into a search for hockey data and to learn what I could do with it began with an assumption about whether or not a particular game was high-scoring. To help answer this question, I need to know what a typical score looks like, what’s low, and what’s high over time.

The calculation of an “average” in my first post is one way to find out what’s typical. (I know… averages are not always the right measurement to use. More on that in a future post.)

By using analytics, I can answer multiple related questions. By knowing what an average score looks like, I know by extension whether a score is high or low. And then I can use that information to discover whether certain teams have a propensity for high scores or low scores and whether that changes over time, and so on.

Clearly I could go off in a zillion directions, so it’s important to define scope for each project. For now, I’m limiting the scope of my analysis to game scores. And Power BI makes this process pretty easy.

Step 3: Review the characteristics of the data with simple statistics

I began this process in my last post in which I introduced the initial group of simple statistics—counts for categorical variables and minimum, maximum, average (mean), and median for numerical variables. I set up tables of these simple statistics organized by data set and reviewed the results in Power BI which you can also see in that post.

Data is sometimes dirty. Or reveals something unexpected. The initial review process using simple statistics can help you figure out what needs to be fixed, what new avenues for exploration might be beneficial, and whether the unexpected is actually a new insight.

To review, here is the list of anomalies I’ve already noted in the categorical variables in the games table:

• There are 127 games without a venue.
• The number of games per season seems to be increasing over time. Probably more teams were added over time which resulted in more games. However, as I scroll through the values, I see a significant drop in the number of games in the 1994-1995 and 2012-2013 seasons.
• There is an interesting spread of start times for games, such as 12:30 am or 4:30 am. Really?
• There are venues for which only 1 game was played, or a really low number.

Also, I noted the game types have abbreviations that I don’t understand. I needed to look those up and add the full name for the game type at some point.

Step 4: Review the “middles” and the “ends” of numeric data

Distribution of data can be quite informative about your data set. I’ll get more deeply into distribution in a future post. For now, I want to focus on the middles – which are the average and mean values for the games and scores tables as described in the previous post.

Here I’m again looking for reasonableness of the values and thinking about what these values suggest, that further analysis would confirm or refute.

The other two statistics, average and median, tell me a bit about the middle parts of the data from two different perspectives. The official term for the middles is central tendency.

I notice these values are fairly close together numerically which tells me that the data isn’t heavily skewed. I’ll explain more about skew in a future post, but in general it tells me that I don’t have a lot of rows in the data set that have a value significantly higher or lower than the average value.

Next, I’m interested in assessing the “ends”, also known as the extremes:

Or maybe it’s just me and my relative newbie-ness to hockey that finds some of this data odd. I’ll find out eventually as I put on my detective hat!

Now I want to use Power BI to dig more deeply into the details of my data to determine its accuracy and decide whether I need to take additional steps to clean the data. Today I’ll take on the case of the missing venues.

My quick approach to analyzing Venues is to duplicate the Games Categorical Variables page in my report
and then I delete the tables except the one showing the game count by venue. Next, I apply a Visual Level filter to the visualization to include only the blank venues and add in the Game Season field to see what’s up with the data.

Then I add the Game Name field to see the games, such as Anaheim Ducks @ Los Angeles Kings 9/17/2005. (In fact, I notice all the games look like preseason games by the dates. Hmmm.) My assumption is that this game should be at the Los Angeles Kings venue, and that each missing venue is the venue associated with the home team.

First, I want to validate that the venue data is missing from the source, and yeah, the venue information is indeed missing. I still don’t know why. I’d have to understand how the NHL statistics API compiles its data, but at least I know at this point that nothing that in my process created this problem.

A little search on the Internet confirms that this particular game was in fact played at the home arena for the Kings, Staples Center. I’m not inclined to look up every single game, but I’m okay with going out on a limb and assuming that the home team’s arena should be inferred. I’m also going to add this information as a separate column so that I can use either the original data from the NHL or my inferred data.

To fix the missing venues by populating a value based on the home team, I performed the following steps:

Formula.Firewall: Query ‘getGames’ references other queries or steps, so it may not directly access a data source. Please rebuild this data combination.

Although I wrote the steps above sequentially, the process was really iterative process. Find a little, fix a little, find some more… round and round we go.

After my first attempt at a fix, I still saw games with missing venues. It turns out these were all exhibition games that were pre-season. Most of them were out of the country, with one exception – the Dallas Stars @ Texas Stars game. I had think about how I want to handle this situation. My options:

But… I can see if I add Game Venue back to the table that the Alt Venue column doesn’t always match when Game Venue is not null. Hmm – more to think about how I want to handle.

For now, here’s a link to the PBIX file if you want to take a closer look.

In the next few posts, I’ll tackle the other anomalies and likely continue making adjustments to my data set queries and the Power BI model. Stay tuned!