Hockey season is almost over and I’m very excited to see my home team, Vegas Golden Knights, not only make it to the playoffs, but also earn the Pacific Division Championship! An accomplishment no one predicted at the beginning of the season. It’s their inaugural season after all. Who does that? (Go Knights Go!)  I’m curious what the data has to say, but I’m jumping ahead of myself.

After a fair amount of hockey data wrangling and some sanity-checking of the data in Parts 1 through 5 of this series (which starts here if you need to figure out what I’m up to and why), I’m ready to start using data visualizations to continue the data exploration process–this time by focusing on the data distribution.

When I began the first pass through my data, I built tables to explore the “middles” and “ends” and promised that I would explain more about distribution in a future post. Well, that post has arrived!

Let’s start by reviewing where we’ve been. For each of the tables in the Power BI model, I isolated the numeric variables and created table visualizations to display the minimum, maximum, mean (average), and median values for each variable.

My purpose at the time was to sanity-check the data. And indeed I found some flaws which I need to figure out how to handle because the source data has missing pieces. But the missing data is for a single year and for pre-season games, so for now I’m going to live with it. I’m more interested at the moment in other things, but I have it noted as a to-do item for the future.

By reviewing these four values, I learn about the distribution of the data. In other words, I learn about the range of possible values in my data and how often certain values occur (also known as frequency). The minimum and maximum values tell me about the boundaries of the data values, and potentially clue me into outliers. The mean (average) and median values tell me something about central tendency. That is, what is a “typical” value in this data?

The mean is a commonly used descriptive statistic. It is calculated by summing up all the values in the data set and then dividing the result by the count of all the values.

Median is something you might hear about in demographic statistics – the median home value, the median salary, the median age, etc. It’s calculated by dividing the values into groups where half the values are above a point known as the median and the other half are below this point.

And with 5 values, clearly 4 and 5 are in the top half and 1 and 2 are in the bottom half, and 3 straddles the middle. That’s’s the median. Easy peasy.

The value 3 is both mean and median, which tells me there is no skew in this data. It’s symmetrical with values congregating neither at the higher or lower edges of the range of possible values.

The difference between the mean and the median also tells me something about the data distribution:

When you analyze data by using mean and median, both numbers are useful because they provide clues about the potential presence of outliers. And by looking to see whether mean or median is the higher value of the two, you know something more about the data:

I can get all this information about my data by creating tables and looking at the comparisons one by one. But my brain has to work harder at making the comparisons.

Visualizations to the rescue! A common way to visualize data distribution is to use a histogram.

Power BI does not include a histogram visualization out-of-the-virtual-box. I could create one with some gyrations that would require me to decide how I want to group data and count up the frequencies, but that would be overly tedious for every combination that I want to review.

In this post, I’m going to introduce two options: a custom visual and an R visual. In addition, I’ll describe the pros and cons of each.

Power BI provides easy access to visualizations that have been created by Microsoft and third parties. In the videos below, I’m using a cleaned up version of my previous PBIX file – I removed all the report pages in which I was exploring the anomalies discussed in my last post and the post prior to that.

The pros of using this custom visual:

The cons of using this custom visual:

If you know how to use R to generate a histogram, you can create your own code and produce exactly what you want.

Before you start, you do need to configure Power BI options to set your path to the R libraries and the R IDE that you want to use: 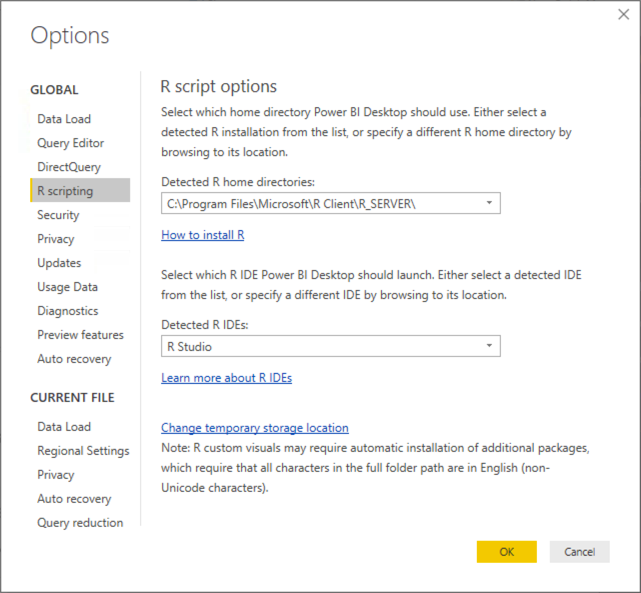 In my report, I decided that I want to be able to generate one or more histograms based on the number of numeric fields that I pass to the script. And I want to show mean and median on the histograms. And I want to include summary statistics as well.

I have a lot of wants. With R, I can handle those wants!

I can then paste the script into the editor for the R visual in Power BI and run it view the results in my report:

The pros of using the R visual:

The cons of using the R visual:

Viewing the visuals in the Power BI service

Everything looks fine (mostly) when I publish my report to the Power BI service. (I say mostly because it looks like I stumbled across a bug in the numeric slicer.) Here’s the proof of working visuals:

All is well and good (assuming you’re sharing with Power BI Pro users), unless you want to embed your report in a Web page – whether internally within your organization or externally in a publicly accessible location. If it includes an R visual, you have a problem.

Jump to page 18 to see what I mean. Hint: a fast way to do this is to click the 4 of 18 at the bottom of the report, scroll through the page titles until you see Duplicate of Game Numerical Values, and click that page.

There’s not a right or wrong answer regarding which choice you make for adding a histogram to a report. You just need to know the pros and cons of each choice and go from there.

As for distribution analysis, a histogram is not the only option. There are other types of visualizations that I’ll explore in my next post!

Meanwhile, you can download the PBIX file containing the histograms and the R code if you want to take a closer look.