In fact, since I started working with the hockey data exclusively in Power BI, I’m finding that the refresh process is getting slower and I haven’t even collected all the data that I’d like to analyze yet! Furthermore, I keep thinking of other ways that I would like to use the data outside of Power BI, so I really need to make a separate repository of the data. That’s what I’m up to in today’s post – making a local copy of the files.

Note: I have not yet found the NHL API terms of use explicitly, but I have seen comments made here and there that the non-commercial usage of this data is fine. As I am using this data for demonstration purposes only, I believe I’m in compliance. If I find otherwise, I’ll note it here and adjust my usage accordingly.

SQL Server Integration Services (SSIS) is my tool of choice for this task. My initial plan is to get the JSON files and store the files on a local (or network) drive. In future posts, I’ll cover what I can do with local JSON files, but for now I just want to automate retrieving them.

It turns out that I cannot use the OData Source in a Data Flow Task because the NHL data is not exposed as an OData Service. But I still have a simple way to get files from this particular API — use curl.

There are multiple ways to run curl from Windows. At the moment, I’m not interested in debating the merits of one method over another. For now, I’m using the 64-bit version of Cygwin for Windows with the curl package installed.

To use curl in SSIS to download the files, I use the Execute Process task configured with a call to the curl executable and passing arguments for the URL I want and the path and filename for the JSON returned by the API call.

Using this general approach, I create an Execute Process task as shown below. I always start with a “hard-coded” version of the operation I want to accomplish before trying to use expressions for dynamic operations so that I can make sure everything works as expected first.

Notice the Arguments property has the URL enclosed in single quotes and the -o flag with a file name to indicate the file into which the data will be saved after downloading. The WorkingDirectory property contains the folder path for the output file. 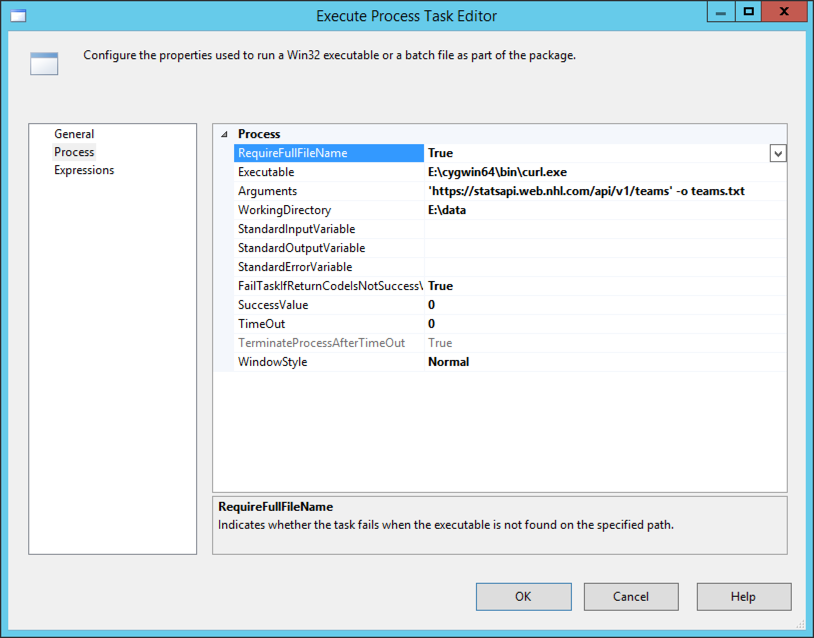 When I execute this task, I get a file where I expect one to land, so all is well.

Except that I am really lazy about creating tasks in SSIS and prefer to figure out a way to automate what I can so that I don’t have to set up a task for every file that I want to download. I need to make a change. That’s where expressions and loops come in handy.

Iterating through the API calls

One of the great features about SSIS is the ability to change behavior at runtime by using dynamic expressions. Rather than set up a task for each API call, I can set up a table, read its rows into a variable, and then use a ForEach loop container to iterate through the rows, create variables for each column in a row, and then use these variables to dynamically build out a URL.

Reviewing my queries that I created in Power BI, I can see that I have different patterns to create. (The context for these patterns is described in the series of posts that begins here). In some cases, I just need to get data from a static URL. In other cases, I need to dynamically generate the URL.

To support the use of the ForEach loop to build the URLs that I need, I created and populated the following table in a SQL Server database:

I’ll use these columns to populate variables that I’ll use in each iteration of the ForEach loop: 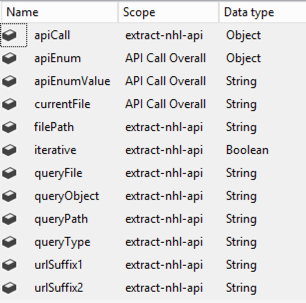 Then I constructed a package to read the table I created, populate variables, and then use these variables to construct the necessary URLs and output file names in an expression associated with an Execute Process task. Here’s the final package: 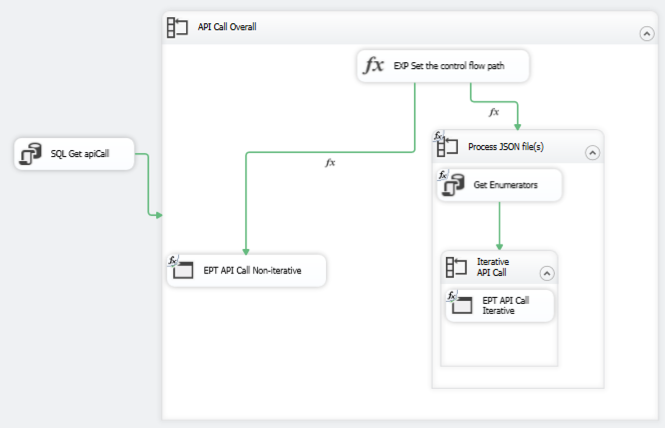 Let me walk you through the specifics of the package: 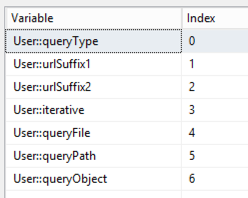 Everything works great in the package above. However, I did encounter a problem that I need to research.

The one JSON file that I need to iterate through that I cannot get from the NHL API (that I know of) is the list of seasons. In Power BI, I generated a list using the {1917..2017} syntax to use as the basis for building out the 19171918 format required to request data for a specific season. I tried to use a T-SQL statement to generate a JSON document:

This statement produces the results I want. No problem here. However, when I use this statement in an OLE DB Source for a Data Flow Task, with the intent of saving the file using a Flat File Destination (as described here), I get a weird file. Everything LOOKS right, except that there’s a stray line feed in the TXT file. I’ve tried outputting as a Unicode file or as a non-Unicode file, but either way the file can’t be read by the code in the Get Enumerators task (which I need to use to loop through the seasons).

After much experimentation, and another pair of eyes (thanks, Kerry Tyler!) , I could see the problem lies in the OLE DB Source component. Something in there is breaking the JSON stream into two rows. A careful review of the screenshots in the post to which I linked in the previous paragraph shows similar behavior, even if the post doesn’t call it out.

Update 2 June 2018: I discovered the reason for this behavior and developed a workaround which you can see here.

Honestly, I don’t really need SSIS to generate the file. It’s a one time thing. So I execute my code in SSMS and use copy/paste to put the results into the season.txt file, and I’m good to go. My package runs fine and I get all the JSON that I want/need downloaded successfully.

For the record, the package took approximately 18 minutes to run and downloaded 1,000 files. On my wimpy little laptop.

Here’s a link to the SSIS package and the code to create the apiCall table.

Mission accomplished for today. Now that I have JSON files, I can do other kinds of fun things with hockey data… Another day!