Once again, I am serving as the professor at SQL University during MDX week. MDX stands for MultiDimension eXpression language and we use it to add business logic to cubes in the form of calculations, named sets, and KPIs as well as to configure security and to write reports. I can’t teach you everything you need to know about MDX in just a few blog posts this week, but I can help you get into the right frame of mind to learn MDX, to get some insight into how the language works, and where to learn more to further your studies.

Before you undertake MDX, you should know something about Analysis Services and cubes. Earlier this year, I presented a series of posts as part of SQL  University to introduce you to this topic:

Build On What You Know

You’ve probably used an Excel spreadsheet at some point and are familiar with using cell references to create formulas. For example, in the spreadsheet below, if I want to perform a calculation that includes the sales for the product “Mountain-200 Black, 38” on 1/1/2008, I would use the formula =B2. The letter B stands for the column reference and the number 2 stands for the row reference. It’s a two-dimensional cell reference.

“OK,” you’re thinking. “I got that. Rudimentary Excel. What does that have to do with MDX?” Bear with me a little bit longer and I’ll connect the dots for you.

Now consider that I have two sheets in a workbook with a similar layout. One sheet for 2008 sales and one sheet for 2007 sales. I want to calculate total sales for the same product in January. In this case, I can use the formula =’Sales 2008’!B2 + ‘Sales 2007’!B2. I’ve added a third dimension, the sheet name, to the cell references to tell Excel where to find the data for the calculation.

Let’s continue expanding on this concept:

Okay, I’ve probably gone a bit too far with this example, and technically speaking, I wouldn’t make each of these aspects of a location into a separate dimension from an Analysis Services point of view. But I want you to get the idea that I can use location references in my Excel formulas to be very precise about which data to include in the formula. Excel understands relative references and absolute references. If you don’t tell it otherwise, it’s going to assume that you want a relative reference. That is, use the current cell, column, sheet,  or whatever that happens to be “current” for the cell in which you are typing the formula unless you give it explicit instructions to use a different cell, columns, sheet, or whatever.

And Now for the Tuple

Now let’s bring this back to MDX. A key concept in MDX is the tuple. I say tuh-ple because I learned it that way and I’m too old to change. (Think quintuple, sextuple, octuple – et cetera. The letter u is short the way that I learned.) Some people say too-ple, and that’s okay too. The beauty of reading a blog post is that you can read it with whichever pronunciation you prefer and my pronunciation won’t get in your way! 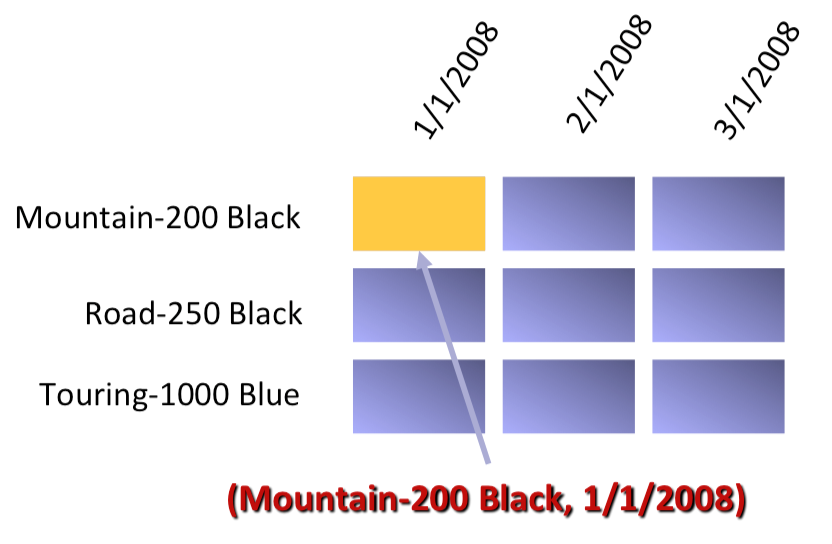 To get data from a cube, I need to ask for that data in the form of a tuple. A tuple consists of one member from every dimension. So in my two dimensional representation of cube data above, the tuple to get sales for the Mountain-200 Black product in January would be (Mountain-200 Black, 1/1/2008).

Actually, that’s what I call a pseudo-tuple because it’s not exactly the way we would write it in MDX, but I don’t want you to get distracted by the details. For now, let’s focus on the concepts of a tuple. 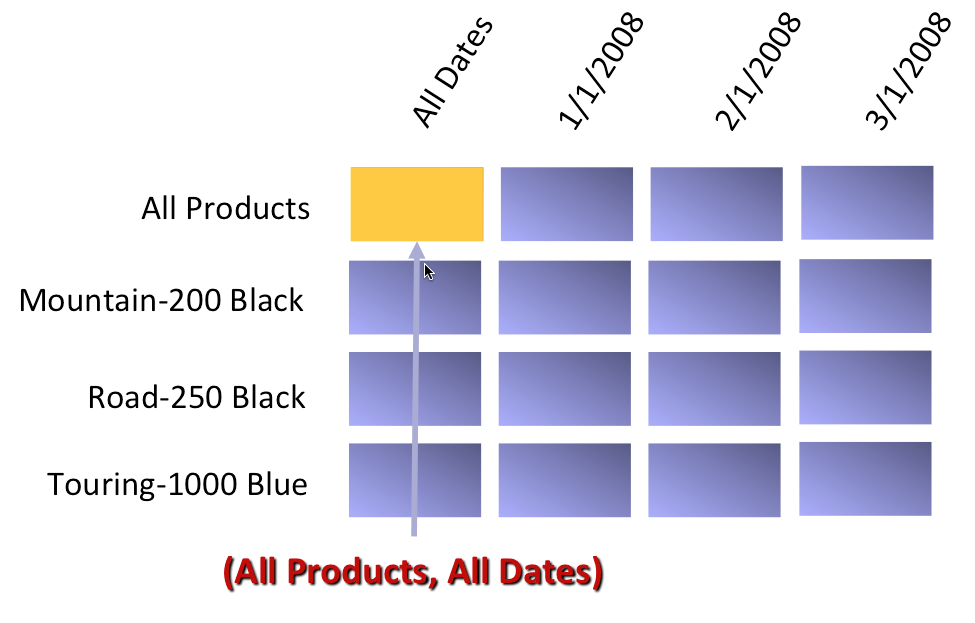 If we have two kinds of measures in our sales, Sales Amount and Order Quantity, then that adds a third dimension to our cube. So our tuple changes accordingly to include the new dimension: (Mountain-200 Black, 1/1/2008, Sales Amount). 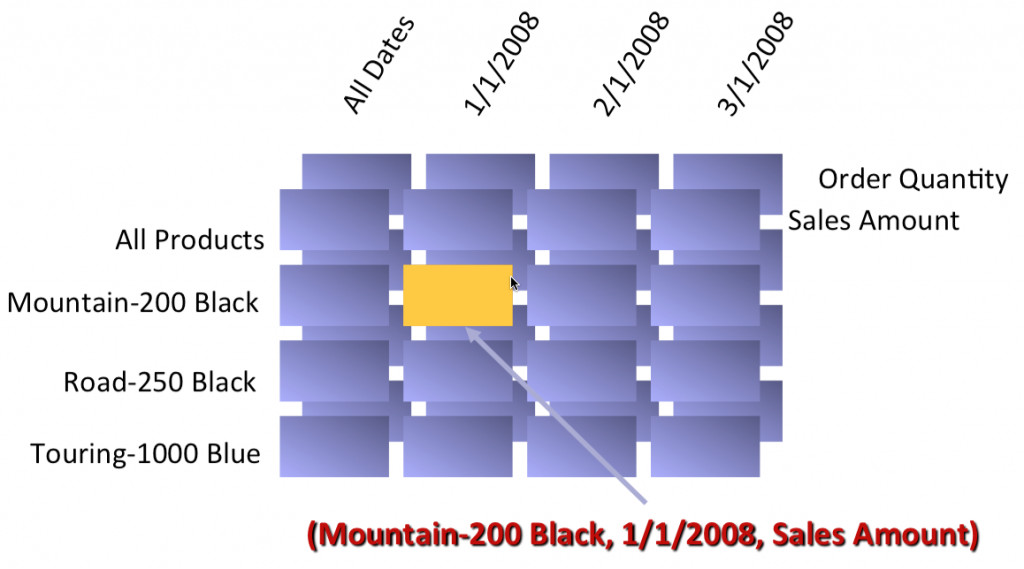 In summary, a tuple is just a location in a cube. We use it to tell Analysis Services where to find the data that we want. Using MDX functions, we can describe sets of tuples that we want to access “as is” or use in formulas. In my next post, I’ll explain how to write simple MDX queries using this concept of tuples.

Button, Button, Who's Got the Button?