If you look at the report layout and a portion of the report shown in Figure 2, you can infer that I have a combination of lookups in play. The report is a simple table that includes StateProvinceCode in the first column. In the State column, I  use the Lookup function in an expression to get the state name from a third dataset. In the Customer Count column, I have an expression that includes the LookupSet function to retrieve the set of customers for the state on the current row and then I use a Count function on that set. Of course, if I wanted a list of those customers, I could use the Join function to convert the array that returns from the LookupSet function into a string. Continuing on with this example, though, I have SalesAmount from Dataset1, and then another expression for “Avg Sale Per Customer” that divides SalesAmount by Customer Count.

The expression in the Customer Count column uses the LookupSet function and looks like this:

LookupSet takes four arguments, much like the Lookup function except that Lookup returns a single value per row whereas LookupSet returns an array:

LookupSet returns an array, so you can’t use the results directly in the table but must use some other function to operate on the array to get a single value.

I like pictures to help me understand how things work, so I created Figure 3 below as another way to visualize what the LookupSet function does. 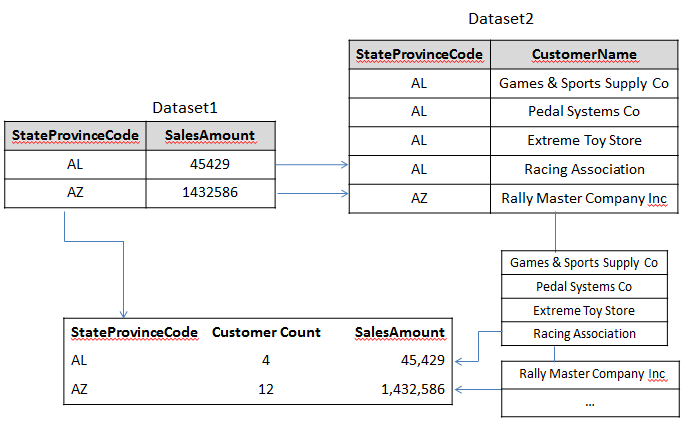 And that concludes this series on the new Lookup functions in SQL Server 2008 R2 Reporting Services. I hope you find these explanations useful. I admit that I haven’t had a compelling need for them, but that’s because I do the necessary integration in the back-end first – either by querying a data mart/warehouse or by joining the data in the dataset. However, I can imagine scenarios where those two options aren’t available in which case having the Lookup functions as an alternative is helpful. What do you think?