Today, we’ll take a closer look at the MultiLookup function. Remember from the discussion in Part I that the Lookup function evaluates one value per row in the source to find one value for that row in the destination. By contrast, the MultiLookup function evaluates one set of values per row, finds each matching value in the destination, and returns the matches in a set. To better understand how to use it, let’s look at an example of how to use this function. In this example, I want to produce a list of the sales of each salesperson and include a list of the states in each person’s sales territory. In my first dataset, I have a comma-delimited list of two-letter codes for the states in each person’s sales territory. In the second dataset, I have a list of states with their corresponding two-letter codes. The two datasets are shown below in Figure 1.

Next, I create a simple table that contains the SalesPerson and the SalesAmount field from Dataset1. I also have an expression in the first column. The layout and a portion of the report are shown in Figure 2.

The expression uses the MultiLookup function and looks like this:

Because this function returns an array of values, the Join function is used to convert the array back to a string of values. For presentation purposes, rather than use a comma separator, I used chr(10) to present each state on a separate line.

Figure 3 shows another way to visualize what the MultiLookup function does. 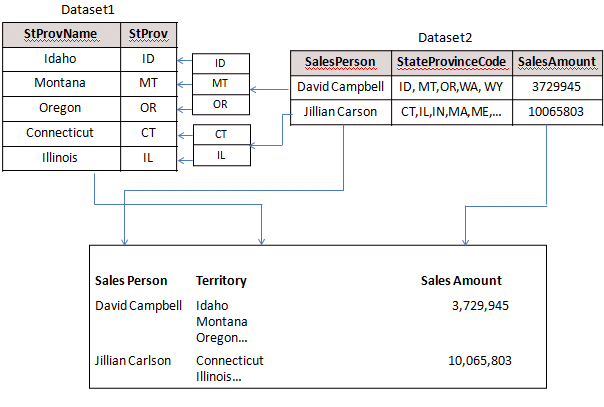 In my next post, I’ll explain the last of the lookup functions, LookupSet.