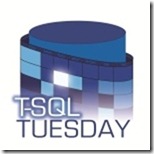 I started my morning perusing a couple of blog posts about the recent PASS Summit which got me thinking about the SQL Community and how much I appreciate it. Then I realized the theme of this month’s T-SQL Tuesday hosted by Chris Yates (Blog| Twitter) and knew I had to join in and share my thoughts of the day. I’ve had a crazy busy schedule the last few months, so I haven’t had time to blog, but I have been spending a lot of time with the SQL Community in that time, so that makes up for my reduced online presence, right?

I started by reading Rob Farley’s post (Blog | Twitter) and a song kept running through my head, “We Are Family”. In fact, I went to look up the lyrics and I thought they fit even better than the bits I was remembering. Just change a few things – like “We Are SQLFamily” – and “I got all my brothers and sisters with me” and call it good. The rhythm will be wrong, but the spirit will be right and the spirit counts more in my book.

My very first Summit experience was in 2002. I still remember riding the escalator up to the 6th floor. I was a speaker at this conference, never having attended before. I was there because my company had encouraged me to submit and I had been selected. I had a packed room and had to cram a day’s worth of content into a 75-minute session. I had a heckler (because I deigned to comment critically on a component he had built related to my topic). His name was Dan Bulos. He spent twenty minutes after the session trying to convince me to see things his way. I still respectfully disagree, but I see his point more clearly now. More importantly, my daughter Erika Bakse (Twitter) now works for Dan, after spending 4 years consulting with me. Most years since that first Summit, Dan and I would hang out together and eventually Erika would become part of the mix. We became a subset of SQL Family, and the family unit is now rearranged. By the way, I really missed both of them this year. It didn’t feel the same without them. 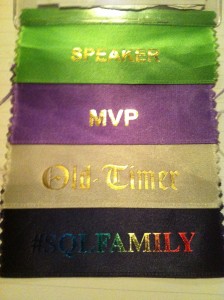 I ran into Eddie Wuerch (Blog | Twitter) at the Welcome Reception and saw he had a #SQLFamily ribbon. I had to have one. He was gracious enough to share with me, and many others in the family.

Another fabulous thing about Pass Summit 2012 was the continuation of a special welcome to First Timers. They had a ribbon. And my brother Eddie had another one to share with me and others, the Old Timer ribbon. Awesome!

Which leads me to the MVP and Speaker ribbon. Rob Farley’s post mentioned how we feel about each other when someone doesn’t get awarded or selected to speak. Totally true in everyone I know. We have a great SQLFamily. In fact, I thought I have an obligation not to be sad about MVP awards, but an obligation to make some nominations. You see, once upon a time I didn’t have one. Not so long ago, in fact. It became a running joke when people assumed that I was an MVP and I had to explain that I was not. I just kept doing what I do and didn’t worry about it, and eventually was recognized.

I’m honored by the acknowledgment and opportunity and want to share that with others that I know work just as hard as me and deserve the recognition. Maybe they were nominated and passed over for whatever reason. No matter – if they are still doing the right things, they deserve a re-nomination. Or a first-time nomination. My point is… don’t assume that someone you admire in the SQLFamily is an MVP. Check it out here. And if you don’t find them and think they should be considered, nominate them!

As for helping people become selected as speakers, be encouraging. Promote participation at SQLSaturday events. Provide constructive feedback if someone needs improvement.

Reflecting back to the first experience, I didn’t know anyone. Other than Dan. And see what he did to me! He stole my daughter! (Just kidding…) I didn’t hang out, I didn’t meet people, I didn’t do lunch, and I didn’t do after-hours events. I showed up, I spoke, I left. I had no idea what I was missing. Don’t make the same mistake I did! Now I couldn’t get away with being a recluse at Summit. I know many of you would hunt me down…

Musings on a BI Career: Past and Future