A nice feature that appeared first in SQL Server 2005 (not SQL Server 2008 – I mis-remembered!) is the ability to allow the user to click a column header to sort that column. It defaults to an ascending sort first, but you can click the column again to switch to a descending sort. You can learn more about interactive sorts in general at the Adding Interactive Sort to a Data Region in Books Online. Not mentioned in the article is how to apply interactive sorting to multiple columns, hence the reason for this post!

Let’s say that I have a simple table like this:

Now when I preview the report, I see icons appear in each text box on the header row to indicate that interactive sorting is enabled. The initial sort order that displays when you preview the report depends on how you design the report. In this case, the report sorts by Sales Territory Group first, and then by Calendar Year. 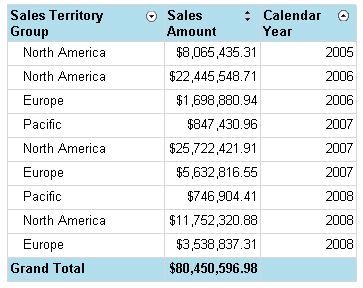 This technique only seems to work when you have a minimum of three columns configured with interactive sorting. If I remove the property from one of the columns in the above example, and try to use the interactive sorting on the remaining two columns, I can sort only the first column. The sort on the second column gets ignored. I don’t know if that’s by design or a bug, but I do know that’s what I’m experiencing when I try it out!

The Case of the Extra Page: Rendering Reporting Services as PDF