If you have any experience at all with Reporting Services, you have probably developed a report using the matrix data region. It’s handy when you want to generate columns dynamically based on data. If users view a matrix report online, they can scroll horizontally to view all columns and all is well. But if they want to print the report, the experience is completely different and you’ll have to decide how you want to handle dynamic columns. By default, when a user prints a matrix report for which the number of columns exceeds the width of the page, Reporting Services determines how many columns can fit on the page and renders one or more separate pages for the additional columns. In this post, I’ll explain two techniques for managing dynamic columns. First, I’ll show how to use the RepeatRowHeaders property to make it easier to read a report when columns span multiple pages, and then I’ll show you how to “wrap” columns so that you can avoid the horizontal page break. Included with this post are the sample RDLs for download.

First, let’s look at the default behavior of a matrix. A matrix that has too many columns for one printed page (or output to page-based renderer like PDF or Word) will be rendered such that the first page with the row group headers and the inital set of columns, as shown in Figure 1.

The second page continues by rendering the next set of columns that can fit on the page, as shown in Figure 2.This pattern continues until all columns are rendered.

The problem with the default behavior is that you’ve lost the context of employee and sales order – the row headers – on the second page. That makes it hard for users to read this report because the layout requires them to flip back and forth between the current page and the first page of the report. You can fix this behavior by finding the RepeatRowHeaders of the tablix report item and changing its value to True. The second (and subsequent pages) of the matrix now look like the image shown in Figure 3.

The problem with this approach is that the number of printed pages to flip through is unpredictable when you have a large number of potential columns. What if you want to include all columns on the same page? You can take advantage of the repeating behavior of a tablix and get repeating columns by embedding one tablix inside of another.

For this example, I’m using SQL Server 2008 R2 Reporting Services. You can get similar results with SQL Server 2008. (In fact, you could probably do something similar in SQL Server 2005, but I haven’t tested it. The steps would be slightly different because you would be working with the old-style matrix as compared to the new-style tablix discussed in this post.) I created a dataset that queries AdventureWorksDW2008 tables:

To start the report: 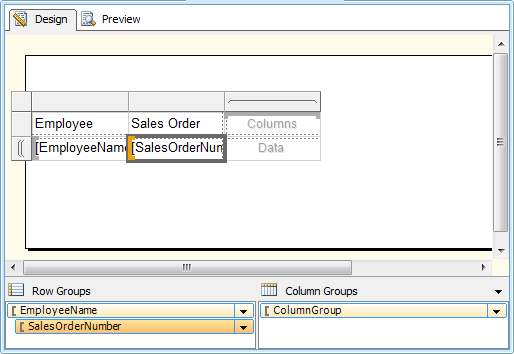 Now for some trickiness.

Again, you need to do some tricks here to get the appearance and behavior right. We don’t really want repeating rows in the embedded matrix, so follow these steps:

As a result, you get a modified matrix which has only a ColumnGroup in it, with a row above a double-dashed line for the column group and a row below the line for the aggregated data. Let’s continue:

Now you’re ready for the fit and finish phase: